Is it true that men should wear boxers and boys wear briefs?
While that may very well be a joke….
Very few men really pay attention to their choice of underwear. It has been the cause of many embarrassing situations for numerous men. From small to gaping holes to outright tears in the fabric. For those who have ever lived on dorm in college or boarding school, you know about the jokes on “skid marks” in underwear seen in the drying yard. 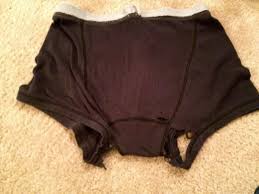 Now, on a serious note, well thinking men do not wear the likes of these: Leave these to the kids.

It’s up to you whether you want to go for a boxer, boxer brief or a brief. Make your decision based on comfort.

Things to keep in mind.

The salesman eyed Joe’s feet and said “Let’s see…. 10-1/2…E.” Joe said astonished, “that’s right, how did you?” “Been in business 60 years!” Joe tried on the shoes and they fit perfectly. Joe walked comfortably around the shop and the salesman asked “how about some new underwear?” Joe thought for a second and said, “sure!” The salesman stepped back, eyed Joe’s waist and said “Let’s see…see 36.” Joe laughed, “Ah ha! I got you I’ve worn a size 34 since I was 18 years old.” “The salesman shook his head, “you can’t wear a size 34, it will press your testicles up against the base of your spine and give you one hell of a headache.”

On a side note: If you play sports, you NEED a sports tights. This helps to prevent chafing, rashes and holds the scrotal sack in place during vigorous exercise. The latter reason is very important because the possibility of sports hernia is likely with people who frequently engage in sports.

These are functional pieces of wardrobe which are a necessity. In the tropics where it tends to be a bit warmer, men often decide on going with tank tops. However, the disadvantages are:
1. With this heat we perspire more and tank tops aren’t as effective as undershirts in trapping the sweat.
2. If you made a poor choice in deodorant, chances are you’ll see it in the marks on the armpit of your shirts.
In North America and Europe where they experience cold weather, the undershirt is a definite plus. For me, based on the disadvantages with the tank tops, I go for undershirts.
Now there are two standard types of undershirts:
There are variations in the V-neck. You may want to get a deeper cut if you’re going without a tie so as to avoid……

On a side note: Ever wonder what causes the green armpit effect? It’s your sweat reacting with the aluminium in your deodorant! There are several treatments to help clean the fabric. (BLEACH is a no no…) Try these links MrsClean and artofmanliness.
Underwear is cheap. No reason for you not to have plenty.